The Best Way to Dance Salsa, Demonstrated in a Shower

How do the French avoid hangovers? 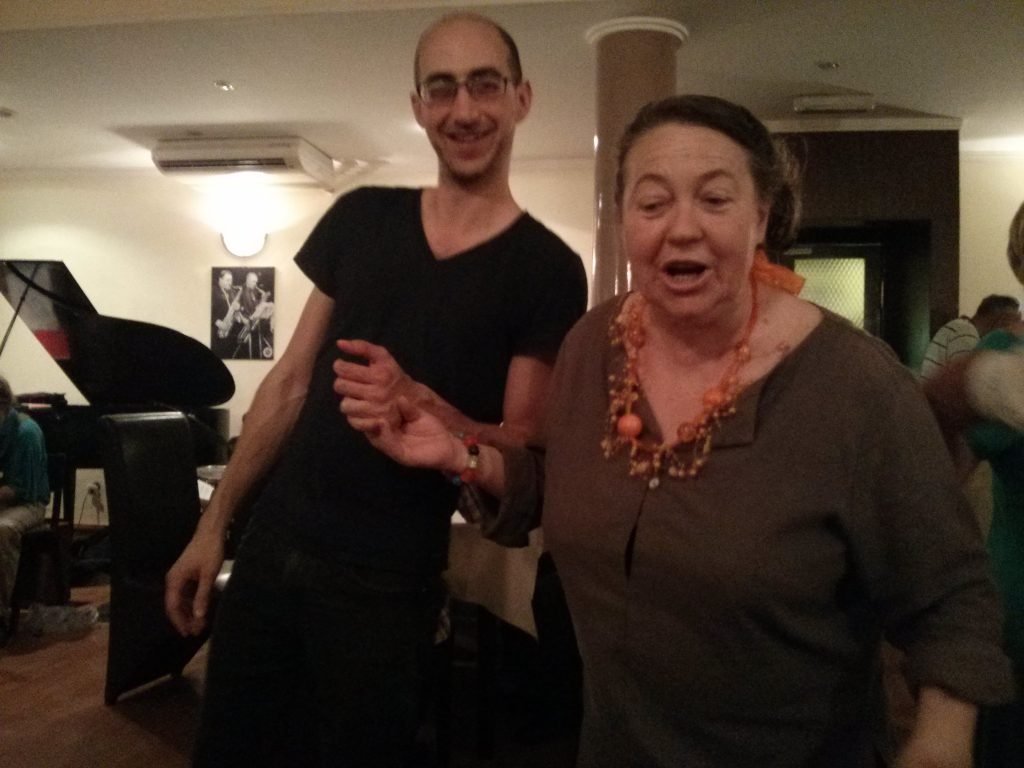 The best adventures in foreign lands usually involve locals who have a couple of generations on me. They didn’t learn to dance from MTV, and they haven’t taken up the lowest-common-denominator drinks wrought on the world’s youth by globalization (Heineken, absolut, mojitos, cosmopolitans). These are the locals with stories to tell, cultural wisdom to share. The lame cell-phone photos above and at right are of a recent night out swing dancing (well, swing shuffling) to a live band in a kafana (classic type of Serbian dive bar/restaurant) in Zemun, Belgrade; the locale, for whatever reason, attracted a rowdy bunch of elderly dancers plus a few of hot young things who were probably friends of the band. Sure, my companion and I could have hit any number of kafanas in the neighborhood and partied with folks more our own age, but we likely would have ended up chatting with people who speak excellent English and have seen The Wire. Instead, I spoke my ultra-limited version of Serbian. One woman told me (I think) that she had escaped a marriage of 47 years, throughout which she never danced, because she was a good wife. The “escape” came when her husband died, and now she went out dancing every night. You should enjoy life, she said, if you’re a Taurus (I’m not, but I assume the advice applies). Another old woman took my companion aside and told her that I was a good dancer and therefore must be terrible in bed; she suggested holding onto me anyway for a little while. We were also explained the complicated love triangles (or polyhedrons) in the small community of widowed dancers who enjoyed the place on early Tuesday evenings.

Not all important life lessons involve dancing and stories of romance; some simply involve drinking. On a trip to Albania with Yannik Frank (imagine a French, sozzled Robin to my Tipsy Batman — whose day job is running his own customizable jewelry startup), we began our last night out by ducking into the dumpiest bar that we had yet seen in Tirana’s city center. Unlike the more fashionable places we had sometimes wound up in during our week there, this spot actually served raki (the classic, tragic Albanian brandy) — an excellent, homemade raki at that. Our asking the bartender for the under-the-counter, homemade firewater piked the interest of a 60-something barfly who, after assurances that I (the American) was not CIA, took a liking to us, bought us several rounds, and, after just an hour, invited us to go home with him (well, demanded it). Obviously, we knew we should accept, but we had made a date that evening with a group of punk-rock 19-year-olds, who had already been quite sweet to us during our stay, and we didn’t feel we should no-show for them. So we decided to split up for a while; I went to catch the young folks and Yannik followed the old guy. You can guess who came out with the better story. Yannik was led to a house for which the old man didn’t have a key. “But it really is my house,” he said. So the two of them climbed over a wall and then through a window. And here, the apparent reason for the visit was revealed. “See the water heater? I just bought it!” the man said. “Watch!” Then, in the coup de grace, he turned on the kitchen faucet, and looked on proudly. Expectantly. Yannik obligingly took this photo:

“I saw the guy’s water heater,” Yannik reported to us a bit later, in a dank punk bar. “Or maybe someone else’s water heater. The guy said we shouldn’t stay in ‘his’ house too long, because someone might come.”

We travel hoping to escape our fear that human experience is universal, and therefore boring. What’s more depressing than a 19-year-old punk rock Albanian in a Ramones T-shirt, explaining that if you drop whiskey in a beer, you get a nëndetëse, which translates as a submarine? I’ve also been shown versions of the same “local” concoction in Iowa and in Belgium; it’s a waste of both whiskey and beer, and it tastes terrible. Older people, on the other hand, tend to offer insights and tales worthy of this blog, such as the magical, medicinal uses of Serbian rakija and challenges of the Catalan wine squirter.

I’m not saying that one should party exclusively with elderly locals. For example, the vigor of youth is great for cross-cultural orgasms (I’ve previously suggested experiencing these at Parisian cathedrals and on the dance floor). And sometimes you can get young locals to tell you interesting stories (especially if you ask about their grandparents). But older locals are better to meet if you want to really want to practice a language (this teenager-senior language exchange program has the right idea), learn interesting customs, and have fun with ridiculous characters who don’t give a shit any more. Globalization has made the world’s youth nearly too tedious to bother with; if there’s any hope at all any more for “authentic” travel experiences, it’s in chatting up old barflies, grabbing a wrinkled hand on the dance floor, and, if you must talk to the youth, using them as translators for their grandparents.

How can we all get sloshed from the same pitcher without getting cooties?

I want to continue my gluttony, but my stomach is saying it’s full.